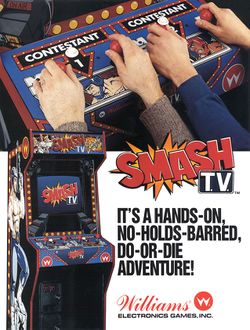 Smash T.V. is a multi-directional shooter arcade game which was released by Williams Electronics in 1990; it runs upon Midway Games's Y-Unit hardware (although it predates Trog by five months!), and is partly based on the 1987 movie The Running Man (which itself was based on the book of the same name). Set in 1999 (which was, at the time, the future), the game's storyline states that television has now adapted to the more violent nature of Man, and the most popular form of television remained the game shows - and one show in particular had dominated the ratings (the eponymous "Smash T.V."!).

The players must use two eight-directional joysticks to take control of two "lucky" contestants (one for moving, avoiding enemies and collecting prizes, and the other for firing); the show is filmed in front of a live studio audience and broadcast via satellite around the world, and once all of the enemies in an arena have been killed, the contestants will proceed to the next one. Revision 8.00 of this game also added the infamous "Pleasure Dome" (occasionally, the enemies will leave keys behind when killed, and ten are required to get in - but depending on how the cabinet has been set, it can sometimes be physically impossible to collect enough). However, after defeating the cobra and entering the secret arenas, you will eventually end up in one with two exits (the one on the right leads to the final arena with the game show host, but the one at the bottom leads to the aforementioned "Pleasure Dome").