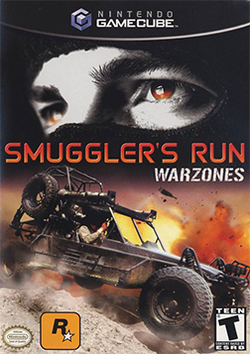 Smuggler's Run: Warzones is a video game for the Nintendo GameCube. It is a sequel to the game Smuggler's Run. Although a different game than Smuggler's Run 2: Hostile Territory, it can be described as a "director's cut", because it is basically a port of the PlayStation 2 sequel, with the ability to unlock extra content by finding tokens scattered around the maps.

Like the first game, the player is a smuggler trying to deliver illegal cargo to destinations within three large maps in a certain amount of time using several different types of vehicles. Changes from the first game include better graphics, larger world maps, different types of missions and the addition of countermeasures. The game also features a multiplayer component with five different modes of play.