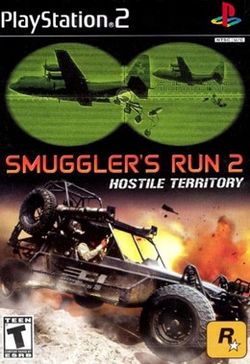 Smuggler's Run 2: Hostile Territory, for the PlayStation 2, is the second game in the Smuggler's Run series, and a sequel to the first game, Smuggler's Run. The game was originally supposed to take place in Afghanistan, but following the attacks on the World Trade Center and the subsequent invasion of Afghanistan, the developers changed the Afghanistan levels to the deserts of Georgia instead.

Like the first game, the player is a smuggler trying to deliver illegal cargo to destinations within 3 large maps in a certain amount of time using several different types of vehicles. Changes from the previous game include better graphics, larger world maps, different types of missions and the addition of countermeasures.