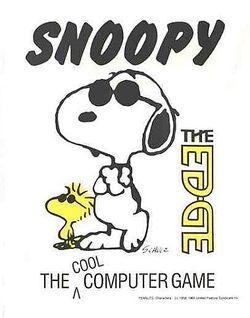 Snoopy, Woodstock, Good ol' Charlie Brown, and the rest of the
Peanuts gang are here at last on your home computer!
Linus has lost his blanket! Whilst Linus's world seems about to
end, you as Snoopy the world's
favourite beagle set out to find the
blanket...but it's not that easy!
Here is a full-blown adventure in 100%
graphic form, like you've never played
before! This game features superb
cartoon-video simulation; you'll think
you're interacting with an animated
cartoon!
When you want Snoopy to do something,
just sit back and watch as the action is fully animated before your eyes!
© United Feature Syndicate Inc. 1989