Snoopy's Silly Sports Spectacular! is a child-oriented sports game that was released by Kemco for the NES in April, 1990 with a confusing origin. It started out as a Famicom port of the home computer game, Alternative World Games. Due to Kemco owning a license to produce Disney titles in Japan, it substituted generic competitors with Donald Duck and his counterpart Daisy Duck, and published the game as Donald Duck (ドナルドダック, Donald Duck?) on September 22, 1988. When localizing the game for the United States where Capcom possessed a Disney license, Kemco swapped all of the references to Disney characters with references to Snoopy and other Peanuts characters.

The game is a collection of six events, similar in style to Track & Field, including boot throwing (similar to hammer throwing), pizza balancing, and sack racing, among others. Like the game it was ported from (Alternative World Games), landmarks unique to Italy are shown (i.e., Leaning Tower of Pisa) and the structures using Roman architecture (i.e., the Colosseum) are shown while the player competes at the six events. Kemco signed a deal with British developer/publisher Gremlin Graphics for the console rights to several of their computer games (such as Monty on the Run). However, this was the only title of theirs to be re-released back to the West. 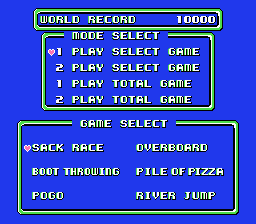 Before you begin to play, you must first select whether to play a one or two player game, and whether you wish to select one particular event, or to play the whole game. Choose one of the "Select Game" options to pick from among the six events. Once you choose an event, you can continue to practice that event until you are done and ready to return to the menu. Choose one of the "Total Game" options to play the entire game where you go through all six events, accumulating points. Even after you complete all six events, play will continue until you achieve 15,000 total points, whereupon you are awarded a medal.

Japanese name: Minomushi (みのむし, Minomushi? lit. bagworm, the sacks that players race in resemble the cocoon of this particular moth.)

While playing the "Total Game", you will continue to achieve higher scores. Once your total combined score exceeds 15,000 points, you will be presented with an award and a gold medal upon the next completion of the final event (River Jumping).