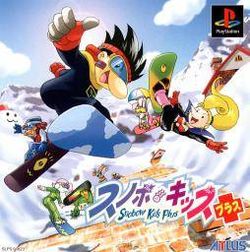 Snowboard Kids Plus, is a snowboarding video game, the second game in the Snowboard Kids series; it's the only one made for the PlayStation console as well as the only one not released outside of Japan. The game is basically a revamped version of the original Snowboard Kids for the Nintendo 64, with the addition of features such as new characters, cut scenes, and more options for customization.

The game alludes to taking place only a few days after the events of the first game, with Linda, 11, having been the victor.