This is the first game in the Sokoban series. For other games in the series see the Sokoban category. 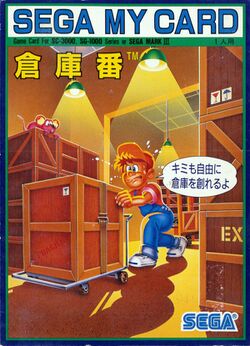 Sokoban (倉庫番, Sōkoban?, warehouse keeper) is a transport puzzle in which the player pushes boxes around a maze, viewed from above, and tries to put them in designated locations. Only one box may be pushed at a time, and boxes cannot be pulled. The puzzle is usually implemented as a video game.

This guide reflects the commercial versions of the game whose title is Sokoban. However, not every version of the game published under this title is identical, as Sokoban as been released in several iterations since it was initially published in 1982. It was initially released as a simple puzzle game on many popular Japanese home computer platforms. It was followed up with an improved sequel in 1984, entitled Sokoban 2.