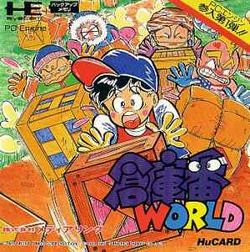 This guide is for the 1990 Media Rings and NEC PC Engine game. For information about Sokoban in general, see Category:Sokoban.

Sokoban World is a PC Engine game published by Media Rings in 1990. It is a graphically enhanced implementation of the, by then, eight year old Japanese puzzle game phenomenon. While still a basic puzzle game, there are attempts to "enhance" the setting by pitting the poor warehouse worker in several environments from around the world. Although the series was never hugely popular in the United States, NEC translated and published the game overseas under the name Boxyboy for the TurboGrafx-16. It has no direct relation to the Namco arcade game known as Boxy Boy, which is known in Japan as Soukoban Deluxe.