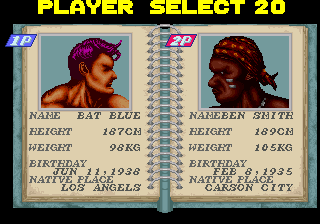 Once you have inserted your coin(s) into the cabinet of Taito Corporation's 1991 one-on-one fighting arcade game Solitary Fighter and pressed either of the Start Buttons, you'll have twenty seconds to choose one of the six fighters by pushing your joystick up and down then pressing any button to confirm your choice; once a player chooses their fighter in a one-player game both he and his first opponent shall hover into view from the left and right sides of the screen as their names appear above them and the text "VS" appears between them. If you chose Ben Smith, Lick Joe, Lee Chen, Ron Max or Tony Won, your first opponent shall be Bat Blue, but if you chose Bat Blue it will be Ben Smith instead (in a two-player game, the same thing will happen, but with both players' chosen fighters). The gameplay is essentially the same as the original Violence Fight only with knife-wielding prostitutes joining in the fight against a human-controlled fighter on the first, third, and fifth rounds (and although you can attack them, they won't retreat until the CPU opponent has been defeated), a new type of bonus round for which the fighters must fight against a bear, and the lack of the four main fighters' younger brothers. 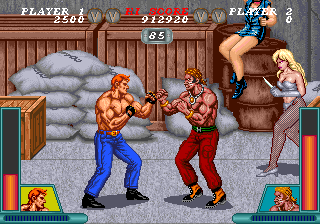 The text "ROUND 1" will then appear on the screen, followed by "FIGHT" as the first fight starts; the player(s) will then have 100 seconds (1:40) to knock out their opponent (who will be controlled by the CPU in a one-player game and by the other player in a two-player game) by punching, jumping into and throwing him (some rounds will also have objects the players can pick up and throw at their opponent). In a one-player game, the text of "INSERT COIN TO START PLAYER 2" shall also flash up at the bottom of the screen - and if a second player inserts their coin into the cabinet, then presses that side's Start Button, the fight will immediately halt as the text "OK PLAYER 2 CONTINUE" appears on the screen and the game will now return to the character selection screen to allow the new player to choose one of the three remaining fighters (and once they have done so the fight will restart with the second player's chosen fighter). Once the player's fighter has completely drained all of the energy of his CPU-controlled opponent (or either player's fighter has completely drained the energy of his human opponent), the text PLAYER 1/2 SCORE A POINT OVER will appear on the screen as one of the two gold "V" lights on their side of the screen turns on and they receive 1000 points for every second they have remaining; if his energy is still at 100, he will also receive a "Perfect Bonus" of 300000 points. In a two-player game the losing player shall have to insert another coin if they wish to continue - and if they choose not to, the game will continue as a one-player game but the text that flashes up at the bottom of the screen will have been changed to "INSERT COIN TO CONTINUE PLAYER 1/2" (if the first player lost and chose not to continue the CPU-controlled opponents will also start out on the left side of the screen as opposed to the right). Once both gold "V" lights of either player have turned on, the text PLAYER 1/2 WON BY A SCORE OF 2 TO X (X being either 0 or 1) will appear on the screen, as that winning player receives a "Fight Money" bonus of 100000 points; the text "YOU HAVE 1 ROUND TO CLEAR" shall then appear on the screen before the game proceeds to the second round. In a one-player game, your second opponent will be Lick Joe if you chose Bat Blue, Ben Smith, Lee Chen, Ron Max or Tony Won but if you chose Lick Joe, it shall again be Ben Smith instead - and the "Fight Money" bonus for that second round is 300000 points (the text of "YOU HAVE 2 ROUND TO CLEAR" will also appear on the screen after receiving it). 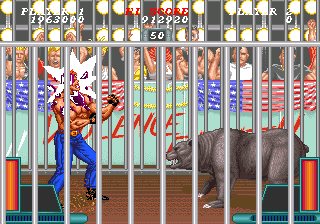 YOU AGAINED A VICTORY AGAIN
NOW, YOUR TIRES BODY NEEDS
A REST.
YOU KNOW, HOWEVER,
THAT IT IS ONLY A BRIEF REST.
BECAUSE YOU ARE A FIGHTER
WHO CAN LIVE IN FIGHTING ONLY.
ANYHOW, IT IS BETTER
FOR YOU TO TAKE A REST, WHILE
THINKING ABOUT A NEW FIGHTING
WHICH WILL OCCUR SOMEDAY.

SPECIAL THANKS
G C HAMER
OSAKA RD
AND MANY OTHERS

THANK YOU FOR THE PLAYING

The misspelling of "tired" is also accurate, and the A in the company's name is, much like the original Violence Fight, represented by their triangular logo that was introduced in 1988; the game will then go into high-score mode. Your score will most likely be the highest on the cabinet to date, so you should enter your initials at the top of the table with pride - and after doing so, the text "GAME OVER" shall appear and the game will go back into attract mode.