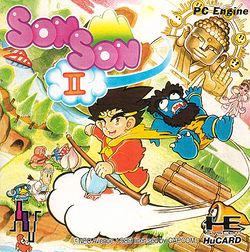 SonSon II (ソンソンII, SonSon II?) is an action-adventure game developed by Capcom for the PC Engine, and published by NEC Interchannel early on in 1989. It is the sequel to the original arcade game SonSon, which was also converted for play on the Famicom. Development of this sequel actually began life as a port of Capcom's more modern arcade game, Black Dragon. However, development of that title was halted in favor of this more original release for unknown reasons.

Just like its predecessor, the game is loosely based on the classic well-known Chinese novel Journey to the West. In this platformer, players take control of SonSon (who is still referred to as SonSon in the instruction manual, but as Son Goku instead by the game) who has to rescue his friends from a mysterious villain. Due to it being originally based on Black Dragon, SonSon II plays differently from its predecessor. The stages are no longer horizontally scrolling and plays much more akin to a traditional platformer. In seven levels, SonSon has to survive various jumping puzzles, fight off enemies with his staff and collect money in form of fruit.

Along the way, he can pick up various helpful items that can either be bought in stores or found hidden within the levels. They include: Medicine that refills SonSon's health, a magic lamp that allows him to continue after losing a life, keys that open doors, a glove that breaks certain walls and a cloud that Son Goku can use to fly during boss-battles. Additionally, SonSon can buy longer and more powerful staffs if he finds somebody who sells them.