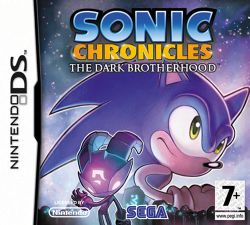 Sonic Chronicles: The Dark Brotherhood is a Nintendo DS console role-playing game based on the Sonic the Hedgehog franchise, and developed by Canadian RPG developer BioWare as their first handheld video game project. The game was released in September 2008 in Australia, Europe and then North America but was not released in Japan until 2009. It was generally received favorably by critics, who appreciated both the graphics and environments, as well as Sonic's overall transition to the role-playing genre; the story, seen as somewhat "lightweight" for a role-playing game and possibly more suitable for younger gamers, was received with mixed reactions, as were some gameplay elements, such as the combat system.

The game initially focuses on the events surrounding the kidnapping of Knuckles and the disappearance of the Chaos Emeralds after the defeat of Dr. Eggman, before moving on to follow the cast of characters across two dimensions as they encounter a new ally, Shade the Echidna, and seek to stop the invasion of their world by Ix, the leader of Shade's tribe, the Nocturnus.