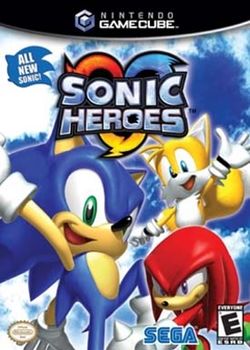 The game introduces several new gameplay elements. Unlike past Sonic games, which have all had a player controlling one character, players are able to control three characters at a time, switching the party's leader from speed, power and flight.

Although the plot for Sonic Heroes is somewhat sparse, a portion of it, particularly Team Dark's storyline, was a set-up for Shadow the Hedgehog released in 2005.