Mystic Mansion is the twelfth stage that Team Sonic completes in story mode. 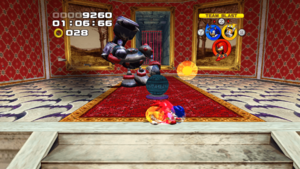 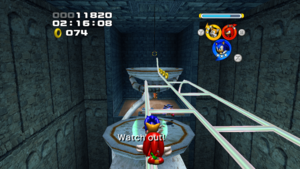 While being inside the castle, take out the enemies near by the switch target and the other one that keeps the door closed. Break it with Knuckles and the other one at the other side of the ghost upstairs too. Open the closed case with the switch covered with boxes (which need to be broken in-order to activate that switch). Be sure to avoid the pumpkin ghosts while doing this. Once open, teleport to the room where the door is connected with walls and destroy the robots on the other side.

Switch to Fly Formation and fly on top of the floating weight crusher and touch the checkpoint before touching the switch to open the door and just simply head to the teleporter beyond the lasers where it takes you to an open picture frame with the Egg Hammer in it. Defeat all 3 of these enemies with Power Formation and head down the pit by either using the pole or going down alone. Climb up the steps and there's a bobsled leading through the digger tunnel. When you see a laser and some ghosts in the way, jump above them until you reach the digger tunnel. The less time you make it, the more chance a bonus may occur such as getting a power up for specific formation used before riding it. Another bobsled is in the cave as well. This time you don't necessarily need to jump to avoid these obstacles when going that fast. After landing onto the wooden bridge, touch the checkpoint and defeat the enemy to open the path to the 3 skeleton rooms with one of them with the sky background outside. Touch the right teleporter to the 2nd room of the area and climb up the plates to reach the point to the teleporter leading to the 3rd room with spiderweb. Grind on the left one to the pulley to head up through the hole and head upstairs. Defeat the magician enemy and break all 3 walls even the one for the switch to open the door above it. At the core room with the fan, switch to power formation and fly up to the door by it. You cannot fly to the highest opening using the fan wind since it's limited to the doorway above the wall where the switch is. If you are in the looped corridor (where is located from the other side of the 3rd skeleton room and is by itself with the full sky) with nothing else but only teleporters and light objects, touch the teleporter to head to the straight one. When you are in that corridor, use Speed Formation to cross over to the stairway and head down through the stairs and jump off either to the bottom (if the doors closed) or to that doorway a mile below this one. Defeat the enemy below the skull latern and head to the door and pull the switch to open it. 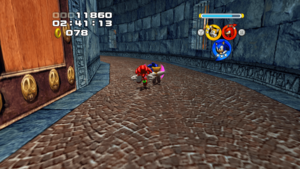 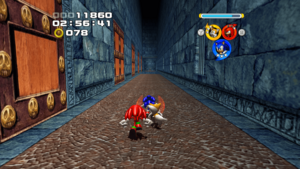 Touch the teleporter to get out of the area and defeat the robots that were formed from the broken statues. Once you also defeat the enemies by the door, either break the armor Egg Hammer or light up the invisible torches to leave the area. If you have a flower glitch activated by opening it and restarting and then quitting to come back and do this, go to the flower next to the picture frame and you'll be taken to the giant spiderweb area where you have to break every bit of the walls to find the path to it. Switch to Fly Formation and fly over the weight crusher with pink borders elevating down. Grind on the giant spiderweb with the same formation and cross over to the other side and teleport to the core room. You will need to avoid the lasers as they are placed below it otherwise you'll lose rings while heading down near the well. If you have been teleported to one of the paths to the trolley, then use a path that goes there either from the top or the bottom. The top one will not have the floor for the water fountain and will likely to be a downward path to the trolley with the checkpoint being below it. For another path, you'll need to defeat the enemies in-order to continue. Before the trolley, there's a handle switch you'll need to pull with Fly Formation and switch to Speed Formation for the Light Dash to head up to head to another digger tunnel with fluid ahead during the ride. Grind on the top rail with the 1-up and stay on the right side of the rail to get to another trolley. While going down through the area with skeletons there, you are going to have to jump above 2 lasers to make it through to the next path. 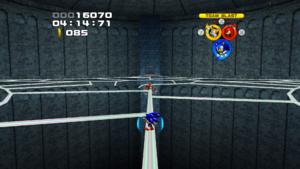 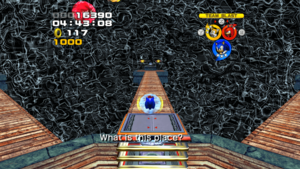 Defeat 4 enemies with one at the door and 3 at the cage to move over to the narrow wall area that allows Sonic to pass to the spiderweb area that goes to that said area. Fly with Tails on the weight crusher with a ghost on top, but don't let the leader touch the ghost though. Once you make it in there by either 2 pathways from the Giant Spiderweb area or the wall crossing area, head down through the well and activate 3 switches to make the rings appear for them to use light dash going from there to the finale room with 3 formation rooms away from the black one. Defeat all the enemies to leave the castle. There are three puzzles you'll need to solve while in these 3 colored rooms. For the speed one, use the homing attack to jump on ghosts all the way to the other side where enemies are. The Fly room you'll need to fly on the platforms and not fall off. At last, the power formation room will have to be done by floating with 3 fans with Knuckles. Once all these are done, head outside the castle by the fly formation and the unknown turquoise bubble room and grab the Goal ring to finish.