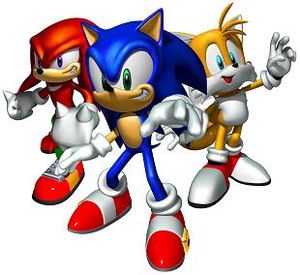 Team Sonic, made up of Sonic, Tails, and Knuckles.

Team Sonic is the main team of Sonic Heroes. One day, Sonic the Hedgehog, Miles "Tails" Prower, and Knuckles the Echidna receive a letter from the maniacal Doctor Eggman. The doc tells them of his new ultimate weapon that will be ready within three days, thereby challenging them to try and find it. Now the three have joined up to stop the mad doctor's plans as Sonic heroes.

The gameplay for this team requires one to race through the levels as quickly as possible, with intermediate difficulty settings. Sonic leads the group as they move over the winding courses, getting them to the goal ring with time to spare. However, if a high ledge needs reaching or a flying foe needs a good beat-down, Tails can take charge with flight to carry his teammates to victory. Whether an army of enemies or a solid barrier blocks the way, Knuckles can take them down easily, and his group gliding ability can handle almost any crevice. The dream team works together to take down the Eggman with speed, strength, and attitude. Team Sonic's abilities are very similar to Team Dark's, with the exception of the Power character's combos (Instead of firing Gatling guns, Knuckles triggers volcanic eruptions) and the Team Blast. Team Sonic's Team Blast, Sonic Overdrive, enables Sonic to use the Light Attack by pressing

in midair near an enemy or group of enemies for a short time. The Light Attack is extremely powerful and can wipe out non-boss enemies just as quickly and easily as the Team Blast itself can. 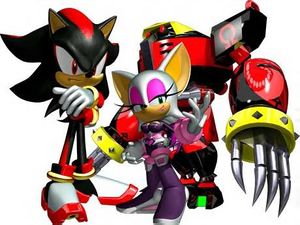 Team Dark's common cause is to find Dr. Eggman. Rouge the Bat, the founder of the team and its resident flyer, wants to find Eggman's secret treasure. Shadow the Hedgehog, the speed specialist, wants to know his true identity and why he was left inside a pod. E-123 Omega, the fully-armed robot, is angry with Eggman for abandoning him and wishes to prove his power to him.

The missions of Team Dark are the most action-oriented in the game, calling for them to blast through giant hordes of enemies to reach the goal ring, and therefore recommended for experienced players. To accommodate for this, Team Dark has some of the more offensive techniques at its disposal. Shadow uses the Homing attack to blast through rows of Eggman's flunkies; Rouge, besides being able to launch her companions out at enemies in the air, can attack enemies on her own with powerful kicks or misleading ring-like bombs; Omega can also launch his friends outwards, after which he can transform his arms into formidable Gatling guns to take out whole groups of foes.

Team Dark's attacks is extremely similar to Team Sonic's attacks, almost no difference. The only notable difference is that Omega's combo is different; he uses his concealed weapons in his arms. Lv. 1 lets him use his machine gun, Lv. 2 ignites his flamethrower, and Lv. 3 launches missiles. Rouge can use Thunder Shoot, and Shadow has no weapons. 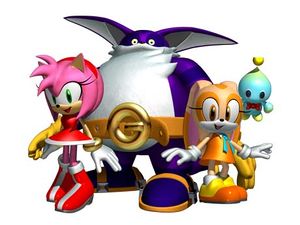 Team Rose, made up of Big, Amy, and Cream, plus Cheese the Chao.

The characters of Team Rose are trying to find their friends. As Amy Rose looks for Sonic, she meets up with Big the Cat and Cream the Rabbit. Big is on the hunt for his little friend, Froggy, while Cream is looking for Cheese the Chao's brother, Chocola. With a picture in the newspaper (being carried off by who they believe to be Sonic) as their only clue, the three join up to form the team and find them all.

The style of play for Team Rose is the simplest in the game, with fewer enemies and longer flight times, and is designed for younger players. Amy leads in the speed formation, and though she's not as fast as Sonic, she does have her useful Piko Piko Hammer, which she can use to smack enemies, smack her friends at her enemies, and to swing around poles. Cream can fly her teammates over long distances,and can pound her teammates on enemies, and when she's alone, she can send her Chao, Cheese, to attack for her,or she can do an uppercut with her ears. Big uses his fishing pole to attack, which can also pop out into a parasol to help the team glide over cliffs and catch air currents. he can also pound on the ground. 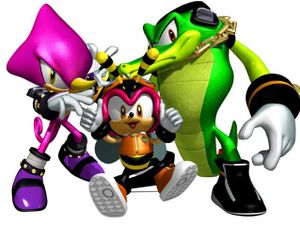 Team Chaotix, made up of Espio, Charmy, and Vector.

Team Chaotix is made up of the speedy ninja Espio the Chameleon, the powerful leader, Vector the Crocodile and the air-headed flying ace Charmy Bee. Notably missing is Mighty the Armadillo, who appeared along with them in Knuckles' Chaotix.

The story is that Team Chaotix is a detective agency. One day they get a mysterious call from a stranger that claims that if the job he has for them is completed he will have a large amount of money. Espio, being the mysterious guy of the group does not think that the case is fit for him but Vector reminded him of the number one rule, "We never turn down work that pays!"

In Sonic Heroes, the missions of Team Chaotix are unique and/or unusual. Whether it's collecting hermit crabs or destroying golden turtle robots, their goals are unlike those of any other team. In addition, they have unique skills that set them apart from the others. Espio, for instance, can become invisible in order to avoid enemy fire and to pass through laser barriers, while Charmy can activate special flowers to transport the group to another flower on the other side of the level. This team is recommended for those looking for a change of pace from the general "reach the end" style of play. 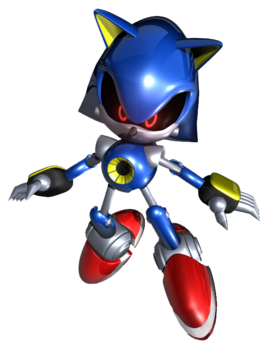 Metal Sonic's official return to the games was as the main antagonist in Sonic Heroes, where he transformed himself into Neo Metal Sonic. Neo Metal Sonic has elf-like shoes, shoulder blades, gauntlets, body armor, a large spike at the top of his back jet, a cape (which actually protrudes out of the back of his waist, hence, a side-skirt), longer spines on his head, a spiky belt, and white stripes similar to Shadow's design. A common misconception is that Metal Sonic gained his upgrade and shape shifting abilities via the data of Chaos. This is however incorrect, as Metal had shape shifted into Sonic in order to steal Froggy and Chocola, which had the data of Chaos. 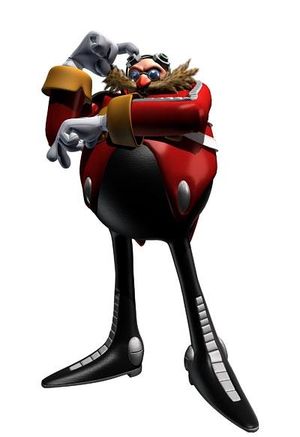 Eggman, a character of Sonic Heroes.

In Team Chaotix's story, the team enters a building by direction of their client, who they discover inside to be the notorious Dr. Eggman himself. Vector then asked Eggman who locked him up in the prison. He then replies "It was-" but is cut off by the scene finishing.

All of the teams, and Eggman, rush toward the tower and discover Metal Sonic atop it, who then transforms into a powerful, massive reptile form (Metal Madness) by combining the data copied from Teams Sonic and Dark through the power of Chaos. Teams Dark, Chaotix and Rose then compose a plan to stall Metal Madness while Team Sonic powers up into their super forms to defeat Metal Overlord.

After it is defeated, Metal Sonic reverts back to its original form falls back down to the ship and shuts down.Team Chaotix chase after Eggman to get their pay.