After the small intro in which a silent Sega logo on a background of a bunch of Sonics and a scene in which Sonic is rolling around a labyrinth (probably as a foreshadowing), press

to enter the selection screen. Here, you'll have a few options. 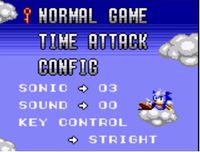 There's the Normal Game option, which is pretty much self-explanatory, as well as the Time Attack option. There's also a small set of options where you can set the number of lives Sonic starts with (the maximum is 10, the minimum is 1, and default is 3) and what controls you use. There's also a sound test option. After choosing these small factors, you can start your game.