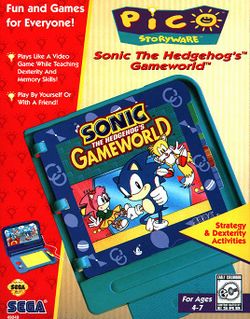 Sonic Gameworld is a party game featuring Sonic the Hedgehog, Miles Tails Prower, Amy Rose, and Dr. Robotnik/Dr. Eggman, and features many different mini-games. Compared to the Japanese version, games featuring gambling, fortune-telling, fantasy violence, rock-paper-scissors, and other uneducational elements were omitted from the North American version. This means that the entire third floor (page) from the Japanese version is eliminated and the remaining games are in different locations than in the Japanese version. The North American version replaces the pilfered non-educational content with a drawing page for young players to create their own designs.

Japanese box artwork for the game