From StrategyWiki, the video game walkthrough and strategy guide wiki
< Sonic the Hedgehog 2 (8-bit)
Jump to navigation Jump to search 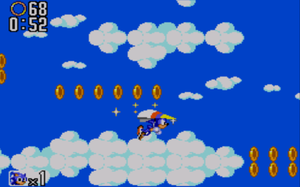 Glide to the finish!

This is a pretty straightforward level. Run to the right across the bridge, but be quick, as it disappears behind you. You can avoid this by jumping over it. Keep going right, but be careful, as there is a pit of spikes nearby, followed soon after by another. To safely clear both, jump across the first, but just before you land, release

so you stop on the spot. Then, get a good run-up and clear the second. Break the Super Ring Monitor for 10 extra Rings. Go right and jump up on the spring. If you want an extra life, keep going right and clear another pit of spikes, then break the Sonic Monitor, go back to the left, and jump on the spring. Hold

to reach a platform above you with a spring to Sonic’s right. Walk into the spring, and as soon as you hit it, hold down

until you hit another spring. Keep

held until Sonic grinds to a halt. You can now go either left or right, following a series of springs to the top of the level, to the right. The right route is preferred, as it is easier to judge how long to hold

in order to reach the highest platform this way, but be careful, as a Game-game Badnik is not far away.

At the top is an Invincibility Monitor. Break it, and continue right to your first encounter with the hang-glider, at the bottom of the hill. However, if you aren’t sure how to control the hang-glider, stop before you reach it, and read on. It can be easy to fall into the vast emptiness below on your first attempt, if you, by instinct, keep

held as you run off the ground. This causes Sonic to point the nose of the glider down, making him fall at a high speed. The hang-glider is the most difficult “vehicle” to control in the game for a beginner, but is not so bad once you get used to it. To clear the abyss, press

as soon as you are in the air, then release it. This will make Sonic rise just enough to fly to the finish, if you press

again about once every second. (Complete controls for the hang-glider are here.) If you do it right, you should hit the eastern edge of the level before you land. This will force Sonic to fall, and the finish panel should be just to the left of where he lands.