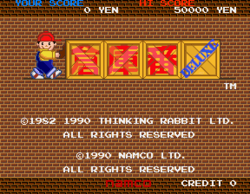 This guide is for the 1990 Namco arcade game. For information about Sokoban in general, see Category:Sokoban.

Soukoban Deluxe (倉庫番・デラックス lit. Sōkoban Derakkusu), which was released as Boxy Boy in the United States (and having no direct relation to the TurboGrafx-16 game "Boxyboy", released in Japan as Soukoban World), is a puzzle arcade game, which was released by Namco in 1990; it runs upon that company's System 1 hardware, and is a graphically enhanced implementation of the then-8-year-old Japanese puzzle game phenomenon. It is the first (and, so far, only) version of Soukoban that was officially released for arcades - and while it features all the rules of the original Soukoban, it also has a timer that determines how long you have to finish the current round before you are kicked off the cabinet (and even if you decide that you have to start the round over, the timer is not reset). If you run out of time, you can insert another coin to continue the round with a full timer; there are fifty-five rounds in all, and if you finish one in less than its best amount of steps, you will receive a bonus.