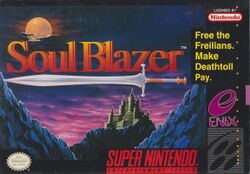 Soul Blader (ソウルブレイダー is just a reading help for Japanese players) was developed and released in Japan, and later localized as Soul Blazer. It is a SNES action role-playing game developed by Quintet and published by Enix. Soul Blazer was released on January 31, 1992 in Japan, on November 27, 1992 in North America, and on January 27, 1994 in Europe. .

Although it is usually considered part of the "Gaia trilogy", according to the producer of Enix USA[1] Soul Blazer is the prequel[2] of ActRaiser. Similar to the company's previous game ActRaiser, the player takes the role of a divine angel (or deity, or lesser-deity, or avatar) sent by a divinity, called Master, to destroy monsters and release the captured souls of a world's inhabitants.