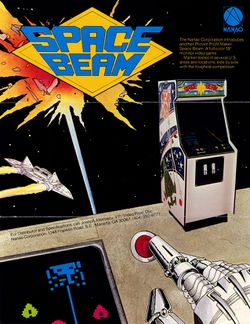 Space Beam is a fixed shooter arcade game that was released by Irem, in 1979; it runs on their M10 hardware, and the player must (as in Andromeda) use a two-directional joystick to direct a ship at the bottom of the screen left and right, and a single button to make it fire lasers at a field of multicoloured alien ships above it (which will serve as obstacles and are worth 10-90 points when killed) along with a number of CPU-controlled turquoise enemy ships up at the top of that screen (which are worth 200 points when killed, but will be resurrected after a few seconds unless it is the end of the pattern). The CPU-controlled ships can also kill your ship, in the same way as it kills them - but the lengths of both your ship's and the CPU-controlled ships' lasers depends on their fuel levels, which are shown at the bottom of the screen (under "FUEL 1" for the player and "FUEL 2" for the CPU). If it is at 100 a laser will reach all the way to the top (or bottom) of the screen; but, if it is not, it will only reach partway up (or down) that screen. So if a CPU-controlled ship fires a laser all the way down to the bottom of the screen at you and misses, you can fire one of your own back up to the top of the screen at it to kill it while it is refueling - but you should remember that the opposite of this situation can happen as well.