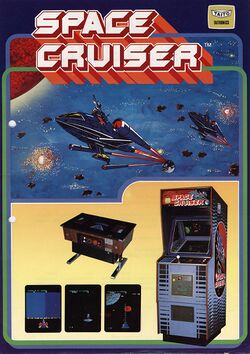 Space Cruiser is a fixed shooter arcade game that was released by Taito Corporation in 1981; it was the first game to run on their then-new SJ System hardware (two Zilog Z80 microprocessors, running at 4 and 3 MHz respectively), and the player has to use a 2-way joystick to direct a spaceship (which is the eponymous "Space Cruiser") left and right across the bottom of the screen with a single button to make it fire shots at the enemies. The game is divided into eight stages - Prologue, Warp, UFOs, Asteroids, Docking (in which the player must dock with a space station for additional firepower and an extra life, but both the Space Cruiser and the space station move in different directions at varying speeds), Aliens, Planet Attacks and Ultimate Annihilation (after which the game starts over again at a higher level of difficulty). In 1983, the game was converted for the NEC PC-8801 and Sharp X1; furthermore, on August 26, 2021, the initial version was rereleased as part of Hamster Corporation's Arcade Archives series of arcade game recreations for the Nintendo Switch and Sony PlayStation 4.