Movement
Moving the Harrier around the screen is done using an analog joystick or a digital direction pad. Each one controls the Harrier differently.

Fire
Press the fire button to shoot your weapon out ahead of you. Your bullet will travel through the air, moving closer to the center as it travels farther ahead of you. 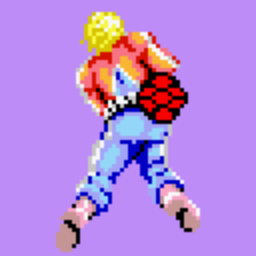 You control the Space Harrier on his journey to rescue Fantasy Zone (or the Land of Dragons in some versions of the game.) Your only tool on this quest is the hand-held jetpack which doubles as an energy bazooka. The jetpack both propels you forward, and permits you to fly through the air, anywhere on the visible screen. Ordinarily, the Harrier flies off the ground, but it's possible to direct him down to the ground, where he will run across the ground. You cannot control the rate at which the Harrier flies forward, he moves ahead at a constant speed. At any time, the Harrier can fire the weapon end of the jet pack, shooting a bolt of energy forward out ahead of him.

The Harrier has no energy meter, and is immediate knocked out whenever he hits an enemy, a bullet or fireball from an enemy, or an immovable object such as a rock, tree, or pillar. Smaller objects such as bushes on the ground will merely trip the Harrier, but does not kill him. Every time you collide with something that knocks you out, you lose a life. When you lose all of your lives, the game is over, although you are given an opportunity to continue in many versions of the game. You will also earn extra lives by reaching a particular score in the game, 5 million points in the arcade by default.

There are no power-ups or other items to be found. You have the same power and abilities throughout the entire game.