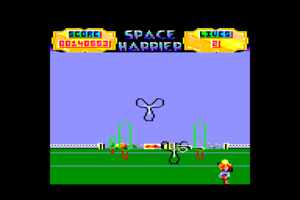 Developed by Elite and published in Europe in 1986. Achieves a high frame rate and good degree of playability by sacrificing the use of sprites in favor of line drawn graphics reminiscent of vector games common in arcades in the early 80s. Only the Harrier himself is fully drawn as a sprite. All other enemies and obstacles are presented as wireframes. 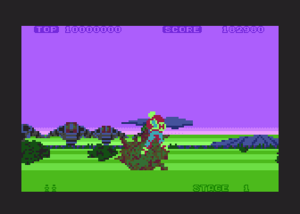 The 8-bit Atari version of Space Harrier was not developed in the 80s when the game was popular, but rather in 2011, taken on as a challenge by coder and graphics artist Chris Hutt, along with musician Sal Esquivel. The result is nothing short of amazing, an achievement thought virtually impossible. Naturally the graphics take a bit of a hit when converting a 16-bit game to an 8-bit system, but Hutt achieves a wider range of colors than typically available by rapidly switching between palettes each frame, making it difficult to capture the beauty of the image in a single snapshot. Even makes remarkable use of digitized voices. 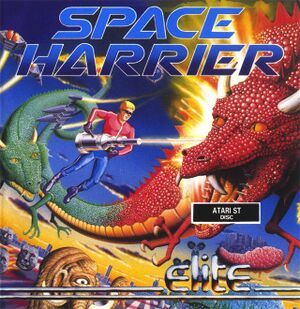 Developed by Elite and published in Europe in 1988. Also published by Sega in North America in 1988. A visually faithful, but ultimately sluggish conversion of the game. For some reason, features an image of Barbarian along the right side of the screen throughout the game. Visually similar to the DOS release. 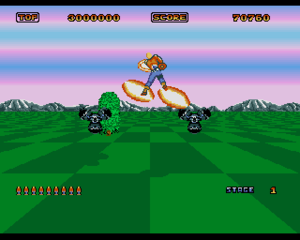 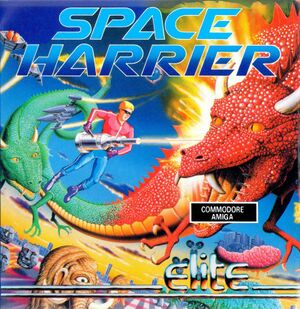 Developed by Elite and published in Europe in 1989. Also published by Sega in North America in 1989. In an unusual move, this version is not really a carbon copy of the Atari ST version, which was a common practice at the time. Rather, this version is faithful to the arcade in both look and feel, as it appears to achieve a more consistent frame rate during play. It also makes use of the entire screen, unlike the Atari ST version. 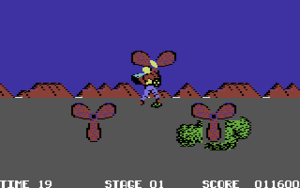 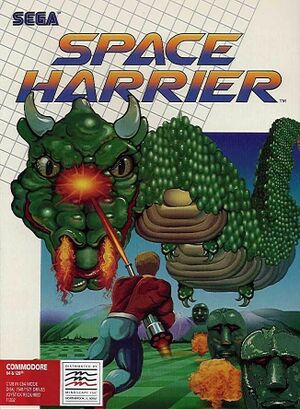 Developed by Elite and published in Europe in 1987. Also published by Sega in North America in 1987. There are two different versions of this game, which very by region. The European version of the game is a bit more stripped down than the North American release. The European version features a flat, unchanging terrain which does not give any impression of movement. The title screen is also a bit different, as are many scoring aspects of the game. The American version replaces the title screen and adds raster bars to the ground to heighten the sense of motion. Both versions only feature 12 stages, with no bonus stages present. 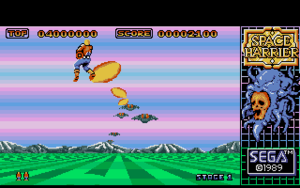 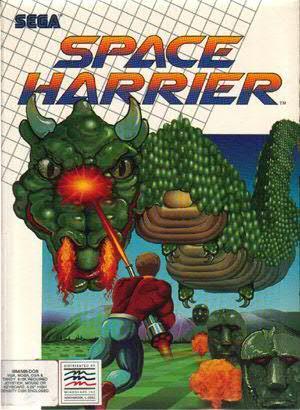 Developed by David Mattern and Brian Rice, and published only in North America by Sega in 1989. This version is nearly identical in look and frame rate as the Atari ST version, down to the incorporation of Barbarian artwork ever present on the right side of the screen. Features far less faithful sound, making use of only one channel. 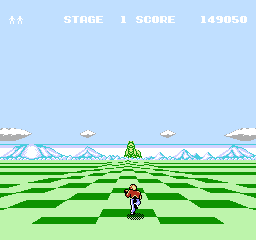 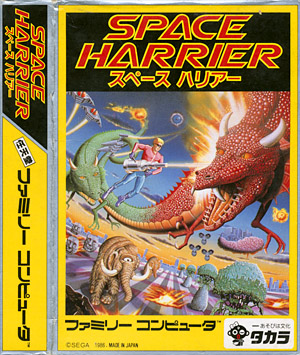 Developed by Whiteboard, and published in Japan by Takara in 1989. Makes a lot of sacrifices, both to the visuals and the gameplay, to enable the game to run, but what is present is done with a good amount of quality. Sound is simplistic, and the game limits the number of moving enemies on the screen. However, even with this limitation in place, the game still suffers from slowdown occasionally. Enemy arrangements are based off the Sega Master System version. 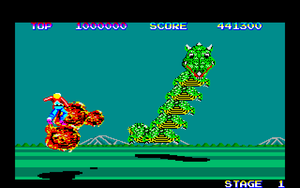 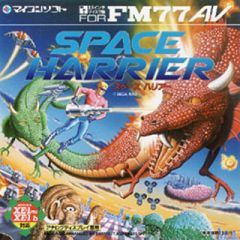 Developed by Dempa and published in Japan in 1987. Makes a few visual sacrifices to accommodate what the hardware is capable of, but plays very faithfully to the arcade original.

Developed and published by Sega around the world in 1991. This version of the game is primarily based upon the Sega Master System version, due to the similarity in hardware. As a result, it uses similar tricks by drawing enemy sprites into the background without transparency. However, it changes the look of the enemies quite a bit by making many of them appear more organic. 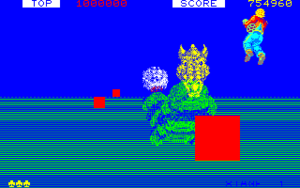 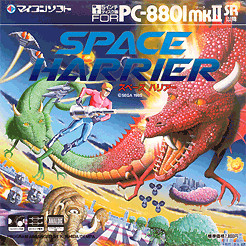 Developed by Dempa and published in Japan in 1987. This version makes a few odd choices in order to make the game playable on this system. The Space Harrier is rendered in full high resolution. Enemies are single color bitmaps that scale fairly well, but only appear in white. Terrain obstacles, shots (both yours and the enemies) and explosions are rendered as nondescript rectangles of pixels that don't blend well into the scene. The music is very close to the arcade. 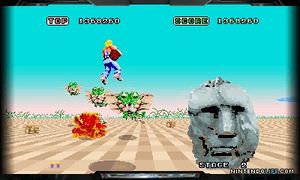 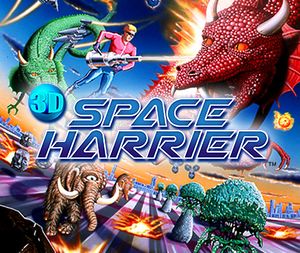 Developed by Sega and published in Japan in December of 2012. Published outside Japan in November of 2013. Space Harrier receives the 3D treatment in more ways than one. In addition to the game being presented in stereoscopic view, the screen itself is presented as part of the deluxe arcade system that used hydraulics to tilt the screen (and player) in either direction, depending on how the player moved. So the screen tilts as it would have on this type of arcade, complete with simulated gear noises. Haya-Oh is also included as a hidden final boss. 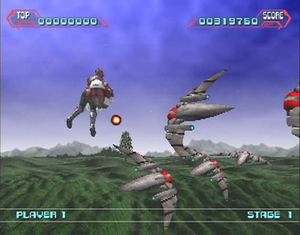 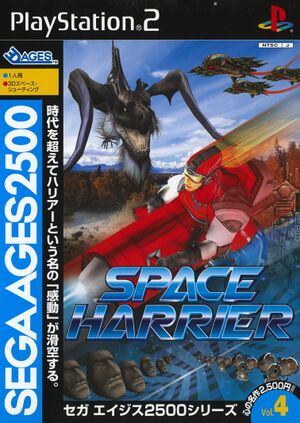 Developed by Rutubo Games and published by Sega in 1994. Widely considered to be the first truly arcade accurate conversion of the game to be released by Sega on a home console. (The Sharp X68000 version was considerably accurate as well, but that was for a home computer.) The only drawback to the game is that it runs at 30 frames per second instead of 60.

Developed by Sega and published in Japan at the end of 1986. Published elsewhere around the world in 1987. This version of the game is a little choppy, and tries to overcome hardware limitations by drawing enemies as background tiles rather than as sprites in front of the background. As a result, the enemies do not feature transparency. Never the less, this version was well received and served as a system seller for Sega. It was so popular, it received a rerelease as part of Nintendo's Virtual Console for the Wii. This version of the game was followed up by a sequel called Space Harrier 3D. 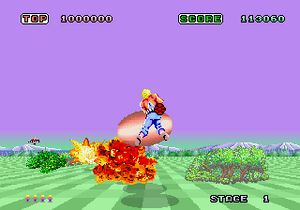 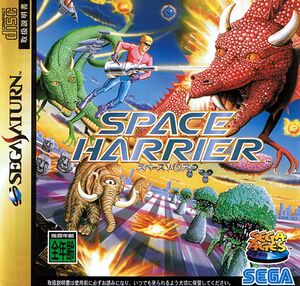 Developed by Sega and published in Japan in 1996. Published outside of Japan as part of the Sega Ages compilation, along with Out Run and After Burner II. A pretty much arcade perfect port of the game. 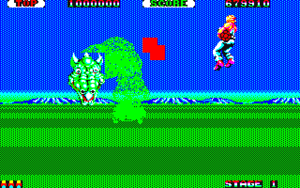 Developed by Dempa and published in Japan in 1988. Like the NEC PC-88 version, some sacrifices were made in order to make the game playable on this system. The Space Harrier is rendered in full high resolution. Enemies are single color bitmaps that scale fairly well, but only appear in white. Terrain obstacles, shots (both yours and the enemies) and explosions are rendered as largely scaled pixels that are difficult to discern until they get close enough and are nearly off the screen. The music is non-existent in this version. 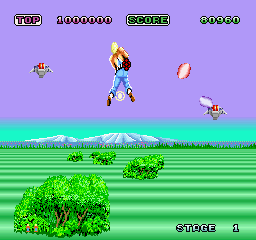 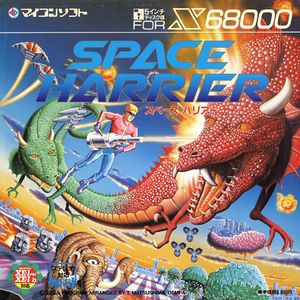 Developed by Dempa and published in Japan in 1987. Like many arcade conversions created for the X68k, this conversion is nearly arcade perfect, with very little changed about the game at all. The most significant change is the switch from the checkerboard terrain featured in the arcade, to a more linear terrain which does an equally good job conveying a sense of motion.

Developed by Dempa and published by NEC in Japan in 1988. It was later published in North America in 1990. Probably the most accurate conversion of the game for a home console prior to the Sega 32X release in 1994. Makes some sacrifices due to the lower screen resolution, but still manages to look good and animate smoothly. Switches the checkerboard terrain for lines like the Sharp X68000 version. Other than that, a very faithful conversion of the game. 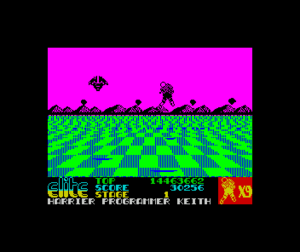 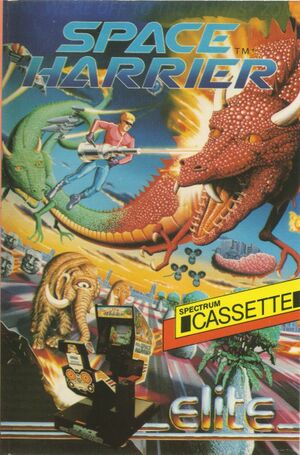 Developed by Elite and published in Europe in 1986. As with many arcade conversions to this system, Space Harrier suffers from the limited available palette, and lack of high quality sound. Despite these limitations, the animation in the game is surprisingly smooth and fluid.