Minia's landscape and occupants will most likely remind you of the third stage. Mushrooms occupy the ground, and you will encounter Loopers in the air through certain segments. But the real danger are the mix of fighter ships that attack you as you fly through the stage. 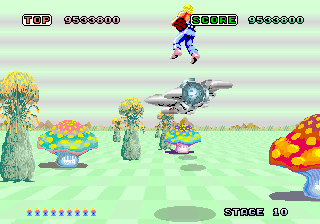 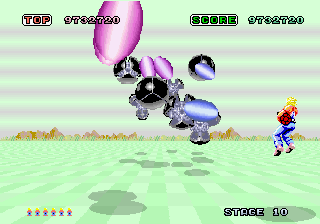 The boss battle of Minia will be against a foe you've seen several times, the Tomos orbs. However, for this battle, there will be eight of them, and they will swarm around the center of the screen, constantly firing bullets at you. You must be very careful to always remain in motion or you will definitely get shot. As usual, the Tomos are only vulnerable to attack when their casing is fully open and they are in the process of shooting at you. However, because there are so many of them, and they are constantly in motion, there's no point in trying to single out one Tomos and destroy it. You're better off just firing into the mass of them, and destroying whatever you get lucky enough to hit. If you don't destroy all of them after some time, the remaining Tomos will disappear, and you will advance to the next stage.