The gloves are off. After completing the second bonus stage, you are into the third and final leg of the game. Enemies will shoot at you relentlessly, and the terrain will throw more obstacles at you then you'll know what to do with sometimes. This is a machine heavy stage, featuring a mix of flying craft and Doms. Early terrain obstacles can be destroyed, but the stage finishes up with indestructable columns. 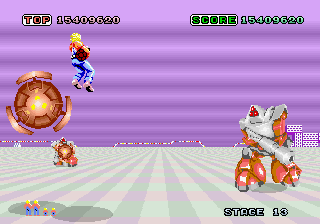 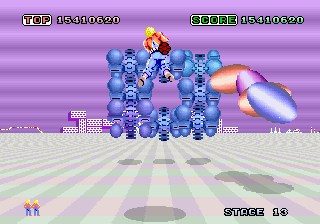 The next boss you must face is a group of machines that remain very close to one another, even as they fan out a bit and fire at you. You'll need to be moving constantly, preferably in a circular motion, in order to avoid getting shot. They change color from light blue to dark blue and back, and they only appear to be vulnerable when they are dark blue. Since they cluster together, you don't have to move very far from the center of the screen to hit them, although you may need to do so just to lure their shots away from you. You don't get a lot of time to defeat this boss, and any remaining pieces will retreat into the background after only four rotations, allowing you to advance to the next stage.