VISEL has no central unifying theme. It consists of a big mix of enemies from various stages, but Dom robots will appear throughout the stage. When the Doms appear, be sure to fly around in a circle to avoid their rockets. The terrain continues to whiz by at a very fast rate, so stay on your toes. 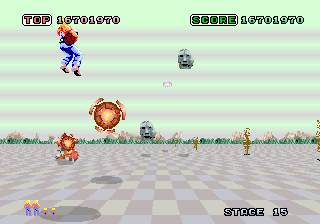 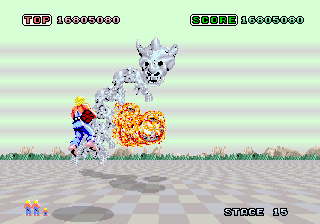 The boss of this stage is identical to the boss of the first stage, apart from this creature being a skeleton. It will snake through the air flying closer to you and blasting you with fireballs, until it gets close enough and begins to retreat into the background. At this point in the game, this should be nothing new to you. Tackle it using the same strategy as the first boss. Keep yourself as close to the location of the head on the screen as you can, without putting yourself at risk for getting hit by fireballs.