NARK is another stage that throws a variety of enemies at you until you reach the end. The real challenge comes not from the enemies attack, but the sheer amount of columns and other terrain objects that you'll have to successfully avoid if you wish to survive long enough to challenge the boss of the stage. Although this boss marks the ultimate threat that the Space Harrier must defeat, there is still one more stage beyond this one, so do your best to preserve your extra lives. 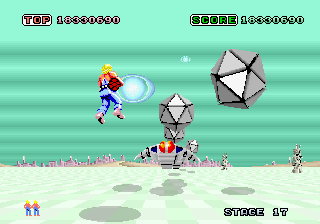 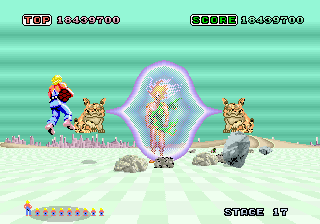 Despite the unusual name, this being is the one responsible for placing all of Dragonland in jeopardy. His reasons for doing so will remain a mystery. He approach you, accompanied by two pets who surround him in a force field. Start by shooting the force field as soon as you can to wear it down. The boss will lift his arms in the air, causing all ground obstacles to fly towards you through the air. Keep moving and shooting constantly to destroy anything that comes your way and hitting the boss whenever you can. You should try to move in the shape of the infinity symbol (∞) which will allow you to avoid getting struck, while focusing your firepower on the boss in the middle of the screen. Eventually the force field will wear off, and his skin will go from purple to red, before you ultimately defeat the boss. Don't stop shooting or moving however, as the obstacles continue to fly towards you for a few seconds after his defeat.