You begin in Moot, where you will be introduced to the mechanics of the game. There are a couple of threats to watch out for. Along the ground you will encounter bushes and trees. You will merely trip over bushes, but hitting a tree will kill you. Above the ground, rocks hover in the air. If you don't shoot them out of your way and fly into them, you will lose a life. Two different enemies will challenge you throughout the stage; the flying ships known as Mukadensu, and a trio of black orbs known as Tomos. 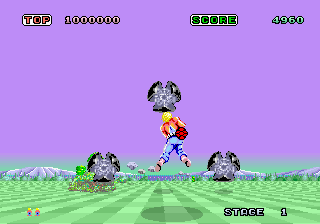 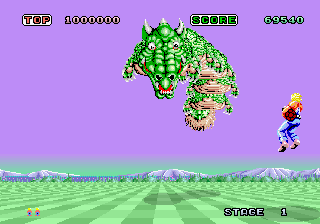 Squilla is a large flying dragon who appears from the distance. He winds all around the sky, switching between advancing towards you and retreating. As he approaches, he breathes fireballs which appear in groups that fly toward the camera. Dodge them to avoid losing a life during this battle. The only vulnerable part of Squilla's body is his head. Although shots will bounce off any other part of his body, it is actually possible to shoot his head even when he's retreating. Successfully shooting him in the head will cause him to change color. You must shoot him five times in order to change his color enough to destroy him. When he is red, it only takes one more successful shot to his head to win the battle and advance to the next stage.