Bushes are replaced by large colorful mushrooms in Amar. And the floating rocks are replaced by another type of fungus known as Loopers that hover through the air. Both can be destroyed when fired upon. However, there are also indestructible trees that you must watch out for. Mukadensu ships make a return appearance here, as well as a new enemy, a type of winged insect known as Canaries. There are periods where your speed will pick up tremendously, so be prepared to dodge anything flying at you. 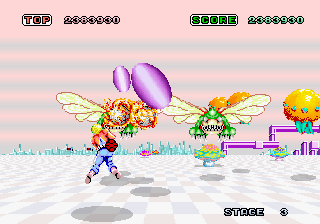 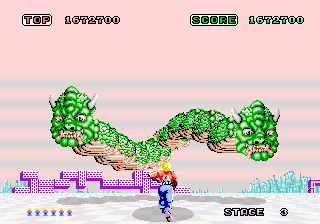 Godarni is a two headed dragon. Aside from the fact that he has two heads, and will be spitting fireballs at you from both the left and right sides whenever they approach, this fight is similar to the first boss fight that you had against the single headed dragon. The only vulnerable portion of the boss is either head. The heads will change color as you shoot them. When you manage to destroy one of the heads, the other head will remain and continue to attack you. Apart from the increased firepower of this boss, this battle is a little easier than the first since the heads don't bob and weave quite as much as with a single headed dragon. You can anticipate where the heads will be with greater accuracy, and it's even easier to shoot the heads as they retreat.