Enjoy the view of the background when the stage begins, because it won't last for long. A ceiling with the same appearance of the floor will be added. Speed is a major factor in the challenge of this stage. Not only will you be dodging pillars, but also rotating icosahedron (20-sided polyhedron) known as Binzubin that occur in groups, either on the floor or the ceiling. 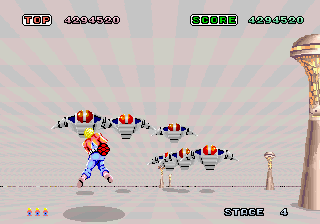 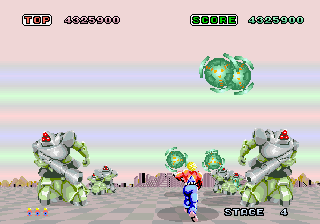 The boss of this stage is not so much a boss, but an introduction to an enemy that you will be seeing a lot of throughout the rest of the game. The giant Dom robots can be particularly difficult to deal with if allowed to remain on the screen for a long time. They fire missiles at you with a good degree of accuracy, so you need to keep moving around the screen in order to dodge them. You will encounter six Dom robots here. They start off in the background and approach you, leaping from one side of the screen to the other. If you don't destroy them, they will eventually disappear behind you. The battle will end whether you manage to destroy the robots, or whether they simply slip past you.