When you arrive, a floating continent appears off in the distance. Olisis is a rather technically advanced area with several new mechanical enemies appearing to halt your progress, including two news types of jet fighters. All of these jets quickly fly into the scene, and disappear rather quickly. 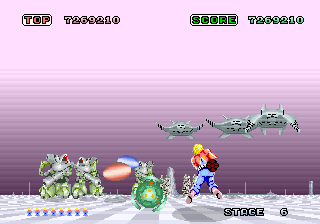 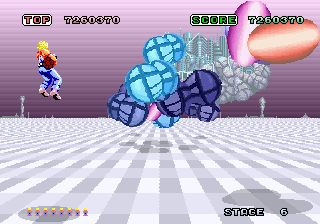 The boss of this stage is a collection of curved objects that look vaguely like blue peanuts. They swarm and swirl around one another, and fire a barrage of bullets your way. They move in and out and after appearing on the screen for only a short while, begin to retreat away from you. There are a total of eight, and you receive 10,000 points for each one that you destroy. You don't actually have to destroy all of them, and in fact it's actually hard to destroy all of them before they disappear. Focus on dodging bullets, and destroy whatever you can before they disappear.