Lucasia is a cold place, with lots of rocks. The landscape is dotted with wholly mammoths that only possess one eye. While they don't directly attack you, you may need to shoot down a few to prevent yourself from crashing in to them. A variety of Dom robots attack you here. Begin to recognize their attack patterns based on their colors. 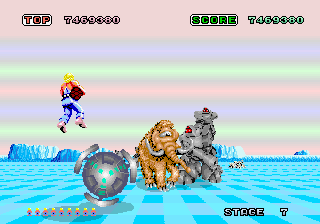 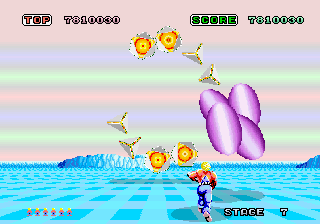 The boss of this Stage is a set of eight triangular looking objects. They assemble in a circle in two groups of four, and rotate clockwise around the center of the screen. They have panels which open up and allow them to shoot at you. They are only vulnerable to attack when the panels are open. Like the boss of the last stage, they will eventually retreat if you allow them to remain on the screen for too long unharmed. However, you have much more time to destroy these units than you did in Stage 7. It's best to move counter-clockwise in an effort to maximize your chances of destroying them while at the same time dodging their bullets.