With a name like Ida, you can expect this stage to contain many instances of the very enemy that it's named after. However, there's still a good mix of other enemies to present a good challenge. There's even a new type of Dom that appears here. There will be a significant amount of ammunition thrown at you here, from bullets to fireballs to missiles. Keep moving, never hang out in one place for too long. 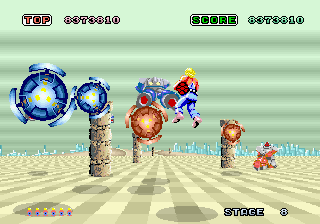 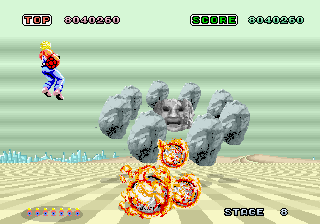 This boss of this stage is a large stone face surrounded by a ring of rocks which orbit around the face. To destroy Shura, you must hit the face with enough shots. However, the rocks orbiting around him will absorb a lot of the shots, so you may have to remove a few before you have a clear shot at the face. This boss moves around in a wide circle, getting close to you, but then disappearing very far into the background before making a return trip. Anticipate when he begins to approach you, and stay near the right side of the screen on the approach. Be prepared to move out of the way as soon as he shoots a barrage of fireballs at you.