The dark skies of Copper Hill challenge you to be as mindful of the approaching terrain as you are of the enemies which appear. Most of the pillars that fly by are in sets of three, with a small gap somewhere in the middle. While dealing with the threats that fire at you, you must either fly safely through the gap, or veer off to the side to avoid collision with the pillars. Stay focused on avoiding enemy bullets, but make sure you are setting yourself up to fly around the pillars as well. 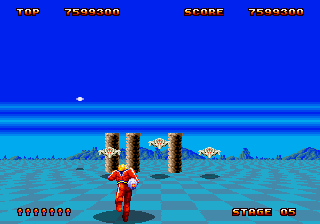 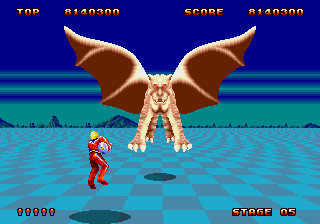 Mantichora has two phases. In the first phase, Mantichora starts out with wings, and he flies around the screen, spitting fireballs at you. He flies towards you, and hangs out close to you for a while before retreating, and then returning. When he is closest to you, you don't have to worry about fireballs, so you should pelt his wings with as many shots as you can until he flies away from you. Once you damage his wings enough, they will explode and he enters the second phase. In the second phase, he runs across the screen at very high speeds, until he comes to a stop and rushes towards you. Stay low to the ground, but get out of his way when he approaches. Then prepare to blast him with your gun when he begins running again. You have a short period of time to shoot the Mantichora when he runs towards you, but don't stick around or he will hit you and take one of your lives. Be careful because he fills the screen with fireballs every so often when he crosses the screen.