The Syura rocks and the Gidora demons that were introduced in the last stage take over in this stage. A ceiling covers the sky, but the pace of the stage is noticeably slower than in previous stages. The more leisurely pace gives you a better opportunity to line up your shots and take out the enemies before they become major threats. 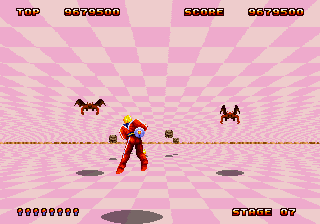 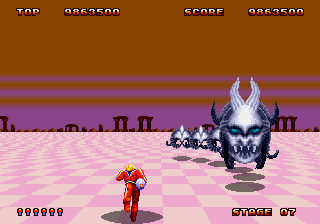 When Medusa first approaches, her face will be that of a serene maiden. After she reaches you, her eyes will open, and her face will transform into the face of a demon. She will then retreat and begin to attack you. Her attack pattern will be not unlike many of the dragon-like bosses in the game, where she will alternate between approaching and retreating. However, she does trick you a bit by only retreating a little bit the first time and turning around before retreating all the way back to the stage. Don't be fooled into holding still and lining up to shoot her as soon as she starts heading back; she will turn around and approach you again, and she will be firing energy rings at you as she does so, so keep moving.