Fallpyram throws a mix of new enemies and old enemies at you. Among the enemies introduced are the rock faces known as Syura, which take over for the Ida in the original game, and the winged demons known as Gidora. There will be plenty of obstacles to dodge, and the enemies won't be shy about shooting at you. 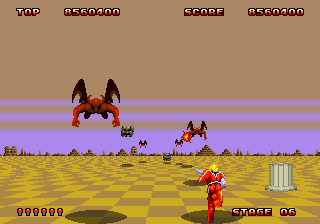 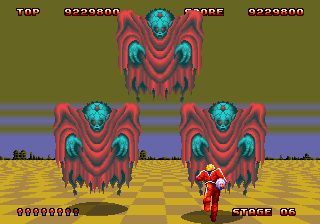 The Wizard will approach you after the lightning has struck, and then drop back a bit before dividing himself into three clones. The clones will circle around the middle of the screen, and all of them will shoot fireballs at you. Keep moving in a circle, either in the same direction, or the opposite direction, in order to avoid getting hit by the fireballs. You must shoot him until he collapses back to one Wizard. His hood will reveal a white mask. Then he will divide into three clones again and resume his attack. Keep shooting the clones until they collapse back to one again. This time he will reveal the green face behind the mask, and resume his attack. Shoot him enough times one last time to finally defeat him.