Each boss' appearance here is identical to the first time you fought against them. No change in strategy is required. The order in which you must fight the original bosses is as follows: 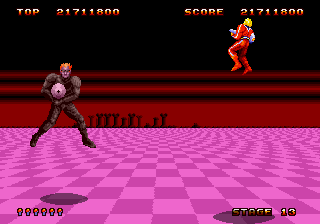 Fighting against the Dark Harrier is in every way like fighting against your mirror image. The Dark Harrier will fly around through the air, shooting at you while you do the same. The only real difference between the two is that he will always shoot where you are, while you have the ability to lead your shots a little so that you can actually hit him. He also has a few quirks that also distinguish him. First is that whenever he is struck by one of your shots, he will stop flying and teleport to another location on the screen. The second is that every so often, he transforms himself into a giant whirling fireball and attacks you. Dodging the fireball is no different than dodging any of his shots: make sure you keep moving around the screen constantly. Holding still or quickly reversing course are recipes for disaster. Maintain an effort to shoot just ahead of where he is going to fly into, and you will hit him enough times to cause him to fly into the center of the screen before he disperses in a burst of energy.