Hell Peak is a particularly dark stage, with a fair amount of variety in terms of enemies. Rock, demons, Barbarians, and Neo Tomos will all attack you at some point in this stage. Stay alert and navigate your way through the pillars as you dodge enemy fire and destroy the threats in front of you. 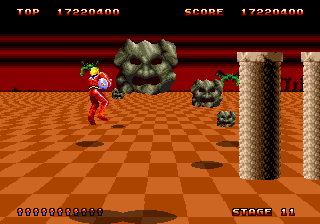 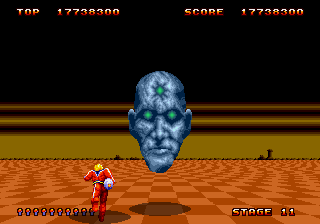 This boss is an interesting challenge. He approach from a distance, and hesitates for a moment. When he's ready, he splits his face up into four parts, which move straight up, down, left, and right. Upon splitting up, all portions of his face are deadly to fly in front of, so you need to escape to safety. This is easily accomplished by flying into just about any corner of the screen. Then wait for his face to reassemble, and press your attack against him. He will then retreat to the background and spit fireballs at you. He will eventually make it back to the front where he will repeat his attack again. Shoot him whenever it's safe to do so until he is destroyed.