Hope City is the last stage that is dominated by the Dom robots. You'll encounter several varieties here, but the stage will finish off with Muka Densu ships instead. Everyone fires fast-approaching missiles at you, so keep moving in order to stay alive during this fight. 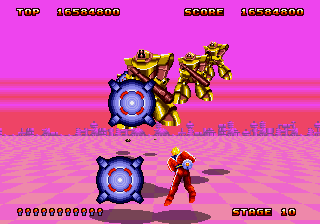 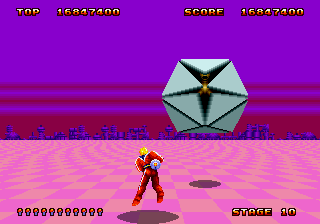 Once a generic obstacle in the original game, the Binzubean is back in it's only appearance in the sequel as a boss. The Binzubean is only vulnerable when it opens a hatch to shoot at you. It flies in from the distance and sweep the lower portion of the screen. You must rise to the top of the screen to avoid getting hit. Then it retreats and quickly returns to sweep the top portion of the screen, forcing you to drop to the bottom. After that, it retreats and comes back only half way. It opens a hatch to shoot at you, and this is your only opportunity to shoot at it and destroy it. It doesn't take a lot of shots and can be done on the first round.