Hot Palace is actually a fairly slow moving stage, which is good because it throws a large number of indestructible pillars at you which you must dodge. While enemies appear and attack you, there are portions of the stage where you are confronted with walls of pillars with only one gap in it that you are forced to fly through if you wish to survive. If you anticipate these walls early enough, you may be able to fly all the way around them, but don't count on that every time. 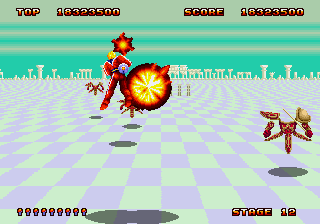 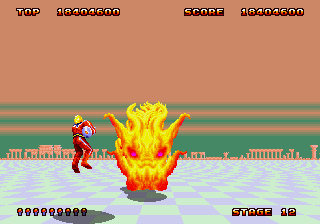 The boss of Hot Palace is a flame dragon known as Cthugha. If you chose an early stage as your first stage, then you'll likely recognize this enemy as a copy of Blizzard, the boss of Yees Land. The strategy will be exactly the same as before: Dodge the rings that Cthugha fires as you make your way down to the lower left corner, and pelt Cthugha with shots as you rise towards the upper right corner along with it. Keep setting yourself back up to rise from the lower left to the upper right whenever Cthugha begins to retreat, and you should be able to chip away at him until it is defeated.