Monark features a mix of enemies throughout the stage, but the Neo Tomos are the central feature, not just as an enemy but also as a boss. Remember that Neo Tomos are only vulnerable to attack when they are fully open and exposed. This stage returns to a fairly fast pace compared to Craddha so stay alert and keep moving in order to dodge enemy fire, but watch out for the pillars. 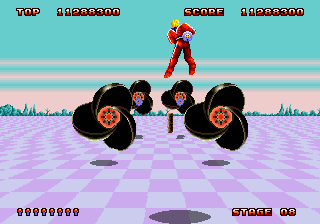 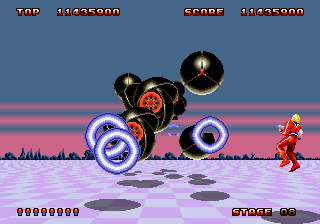 For the boss of this stage, you must face a group of Neo Tomos attacking all at once. They orbit around a common center, and fire at you whenever they open and expose themselves. It's difficult to pick one Tomos out and dedicate yourself to destroying it, so it's better to simply fire into the cluster and hope you hit one. You'll have to move continuously in order to avoid being struck by an energy ring. Move in a figure-eight pattern (or infinity symbol) and concentrate your firepower are you are moving across the center of the screen. You are only given a limited time to defeat the force; if you take too long, the remainder will simply retreat and you will advance to the next stage.