Stuna Area is considered the first stage of the game, although you can select any area that you like to start off in. As the first stage, it is the easiest. The only enemy that you will encounter are the Mukadensu MK II, an upgraded version of the Mukadensus from the first Space Harrier game. They fly through in various formations, shooting energy rings at your current location. Keep moving, and blast the plants and trees for extra points. This stage also features a mini-boss before the actual boss battle, a throw back to Skyra, the boss of the first stage in the original game. 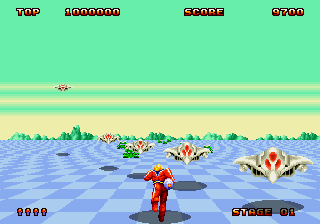 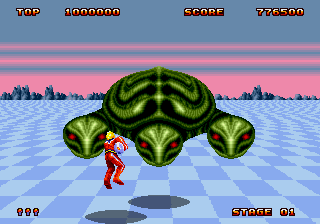 Trimuller is a giant floating three headed turtle. It has a very basic form of attack. It approaches you with its heads drawn into its shell, shooting fireballs at you. When it gets close, it holds still, and all of the heads pop out briefly. This is your only opportunity to attack, so shoot the heads as much as you can before it starts to pull them in and go floating around for a while again. Focus on one head at a time, attempting to destroy at least one each time Trimuller stops. Once it's defeated, you'll advance to the next stage.