Yees Land introduces a number of new enemies, including the jellyfish-like Rageref, the clam-like Ballshells, the dark harriers known as Cyborgmen, and the giant leaping Froggers. This stage has a ceiling that covers the sky and resembles the floor. Don't let the visual effect distract you. The stage is essentially broken up into three different parts, each with their own signature enemy. 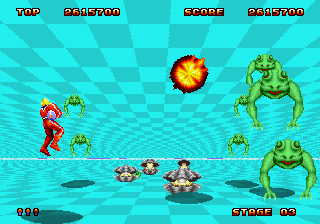 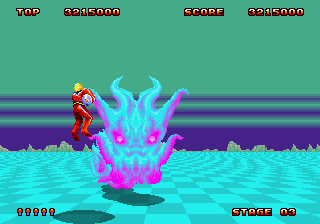 The boss of this stage is a dragon known as Blizzard. Blizzard is much faster than the dragon you encountered near the end of Stuna Area. However, it does move in a very repetitive and predictable pattern. As it approach you, it shoots energy rings at you as it moves down into the lower left corner. Then it begins its retreat back to the upper right. Your strategy should be to dodge the rings on your way down to the lower left corner, and pelt Blizzard with shots as you rise towards the upper right corner with Blizzard. The come down the right side of the screen and across the bottom to set yourself back up for the next attack. Little by little, you'll do enough damage to turn Blizzard different colors before ultimately destroying him.