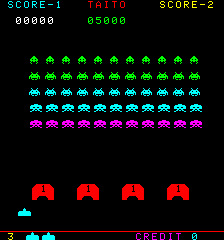 As in that original game, the first three stages (indicated by the number upon the shields, which are now coloured red instead of green), begins with 5 rows of 11 invaders in formation; you must fire upwards between (or through) the shields to kill the invaders, and kill every invader to advance to the next stage. You must also avoid getting hit by the bullets fired at you by the invaders - and the four shields will absorb both your and the invaders' shots. You can create a hole in a shield to fire up through, but the invaders' bullets may drop through the hole as well; as you kill more and more invaders, the remaining ones in the formation will speed up and the last remaining invader will move the fastest, moving faster while going to the left than the right. To prevent the invaders from dropping down sooner, you should concentrate on the ones positioned in either column edge - and, if one of your bullets collides with an invader's, one shall cancel the other out, and it can be either of them that survives. Saucers will randomly appear above the formation which you can try to hit for bonus points; the new flashing ones can only be hit when they are visible, and both types can also now drop reinforcement invaders. Every time you clear a stage, you will be treated to a cutscene of a small invader on a large saucer sending out an SOS - and if the last remaining invader was a large one, you will be treated to a "firework" display and a 500-point bonus. Also, if the last remaining invader was the bottom-leftmost one, you will receive a 1000-point bonus; at the start of each new stage, the formation begins one row lower than before, up to a certain minimum height above the surface, and from the fourth (second in the Midway licensed version) stage onwards there will be "gaps" in the formation to accommodate the fact that some of the medium invaders will split into two when hit. Once you have reached the tenth stage, the shields will display the number "0" - and once you have reached the eleventh stage, they will go back to displaying the number "1". Also, as in the original, if any invader's path intersects with a shield, that section of the shield will be removed.