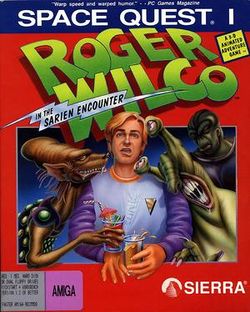 Space Quest: The Sarien Encounter is a video game released in October of 1986, which quickly became a hit, selling in excess of 100,000 copies (sales are believed to be around 200,000 to date, not including the many compilations it has been included in).

Space Quest was eventually remade using Sierra's newer SCI language, which allowed the game to upgrade from its original EGA graphics to VGA. This version was released on August 20, 1991; in addition to the new VGA graphics, which are drawn in '50s B-movie style, it now features digitized sounds. The game's interface was also changed, with text-entry being replaced by a standard icon interface which would be used by many SCI games. Curiously, the VGA remake features the taste and smell icons, which are rarely used during gameplay and are only featured in one Sierra game after Space Quest, namely Space Quest IV, where they were as rarely used.

The game was programmed using Sierra's AGI engine and features a pseudo-3D environment, allowing the character to move in front of and behind background objects. The primary means of input in Space Quest, as in many other AGI games, is through the use of a text parser for entering commands and use of the keypad or arrow keys for moving Roger Wilco around the screen. The Commodore Amiga, Apple IIGS, Atari ST and Mac OS versions of the game offer basic mouse support for movement as well. The game had a 160×200 resolution displaying 16 colours. Sound cards were not available in 1986, so sound is played through the PC's internal speaker; owners of Tandy 1000, PCjr and Amiga computers will hear a three-voice soundtrack, while Apple IIGS owners are treated to a fifteen-voice soundtrack with notably richer sound.

A precursor of this game is the interactive fiction game Planetfall, created by Infocom, whose player-character is a lowly "Ensign Seventh Class", who does the lowest form of labor aboard a spaceship and who appears on the cover with a mop. Just as King's Quest adapted the text-adventure puzzle games set in a medieval world to a visual display, Space Quest did the same for the space puzzle game.