Roger miraculously survives the explosion – the luck that his captors do not share. Now the real adventure begins.

Feel free to explore in this forest. 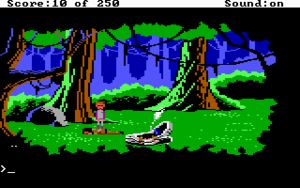 First, search man and take keycard [3] (optional if not going for full points). If you wish, walk over to the crashed pod and press button to turn off the annoying alarm system [1]. Walk north and wait for the message about Roger hearing a high pitched squeal, then head east along the bottom of the screen (you may receive a message about hearing a hovercraft; how soon depends on whether you turned off the beeping or not). You will see a little red creature tied to a tree. Walk over to him and free the creature [5]. Return to the previous screen. Walk up the ramp, and remain hidden behind one of the pillar-like rock formations. Wait and one of Vohaul's goons will fly by [5].

Continue up the ramp and walk one screen to the left. You will see a conveniently (mis)placed mailbox. Approach it and mail order form . [2] After the machine finishes its operation, take whistle . [2] You may now walk south and drop down from the cliff – Roger somehow manages to survive that little fall. Approach large spores on the bottom of the screen, and being careful not to step on any of them, take spore . [4] If you touch them, you won't die, but Roger will pass out for a couple minutes. 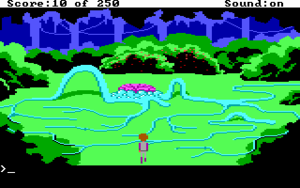 Walk over to the northwest of the screen to find yourself in front of a giant root monster, whose sensitive tentacles create a (rather simple) maze. Beyond the monster, the freed Pinkunz is picking up some berries from the bush. He will go away after a while, although you can chase him away with talk alien . Save your game. Slowly and carefully, walk through the maze, saving often to ensure the least amount of redundancy possible. It is recommended to put the game on slow, use diagonal controls, and stop often. On the other side, approach the bush and take berries . [4] You now must walk all the way back through the maze, utilizing a similar strategy [4]. After leaving the screen with the maze, walk one screen east to take you north of the crash site. Take the ramp up and exit on the right side of the screen to find yourself at the swamp.

On the shore, the freed Pinkunz appears to be rubbing himself a lot. Following his example, rub berries on body . [3] Enter the swamp, and proceed one screen east. After dodging death one more time, position yourself in the deep section of the swamp, and take deep breath . [2] If you only used dive , you won't make it. Swim to the underground cave on the left side of the screen [2]. Once you are there, take gem . [3] Return to the water, take deep breath ,[2] and return to the surface. Continue right for two more screens.

A series of fortunate escapes[edit]

You will notice a withered tree next to a deep chasm. Approach it, and climb tree . [4] After quite an impressive (not to mention risky, stupid, and dangerous) stunt, you will find yourself on a newly created "bridge" of sorts. Be careful not press any direction other than ← or → and do not stand , unless you want to see Roger die. Make sure you have a spore, then move right, and attempt to walk across the next screen. If you don't have a spore at this point, the game is unwinnable. 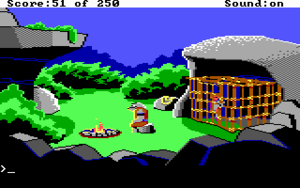 You will awake in a cage, with a rather grumpy looking hunter tending to his campfire. Call will yield no response. Remain persistent: call one more time. As soon as the hunter gets up, quickly type in throw spore but do not execute it until the hunter stops for a moment.[5] Immediately following the hunter's collapse, take key [2] and unlock door . Finally, open door to finalize your escape. If you are not a fast typist, it is recommended to do this on slow speed. Take rope to the north [2], and exit to the north. On the next screen, do not approach the edge: proceed left, and continue left until you return to the screen with the chasm and the tree log.

Check
Did you get the whistle and gem? Did you save the pink creature? If not, go do it now. If you do not do all of this, once you swing rope on the next part, the game is unwinnable. 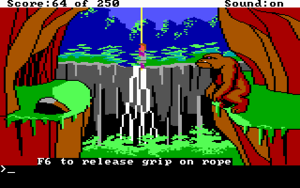 Naturally, you will find a massive, hungry monster waiting for you. Do not press any direction other than  ↑  or  ↓  and do not let Roger's feet go past the end of the rope. Climb down to the bottom and Swing rope [2] As the swinging becomes more and more intense, the monster will attempt to grab Roger. You must press F6 only when Roger is far left enough. The best time to try is after the first grab. His fourth try is successful, so don't hang on too long. If you succeed, you will make the left ledge [5]. Exit into the cave on your left. Use gem to provide yourself with a bit of light [2], and cross the dark cave.

The Empty Spore
If you want the "Empty Spore" item, then after defeating the hunter, go get another spore and bring it all the way here. Roger will be knocked out for a minute, and the spore will become an empty spore. It's just a diversion, so you don't need to do this.
Unwinnable
Are the Pinkunz creatures killing you? Too bad, you should have freed the Pinkunz from the trap earlier.

As Roger gets up from yet another painful fall, don't forget to take gem . [1] Walk one screen down to meet the leader of the Pinkunz. Although your life is safe in the midst of their camp, you still have the world to save, so simply say word [2] and an exit will be provided for you. Enter the hole, and you will find yourself in complete darkness.

As before, you will need your glowing gem: put gem in mouth . You will find yourself in a rather large maze of tunnels. From the beginning:

Or refer to the Pinkunz Maze diagram.

You will find yourself in a large underground cave. Enter the water and swim right. Zig-zag to the fork, and take the right opening to exit the cave [5]. Swim one screen right.

Unwinnable
Don't have a whistle? See the writing on the wall? Hope you had an early save.

Stay in the water, and use whistle . [5] Upon the arrival of the Labion Terror Beast, type in throw puzzle [10] and execute the command the moment you set foot on dry land. If you don't have the puzzle you can just walk left then back right and he'll be gone, but you don't get any points. Walk north to the hole in the rock (made by the Labion Terror Beast) and take stone . [2] Proceed north. 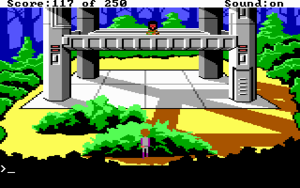 You will find yourself at the landing tower. Multiple solutions are possible here.

Take the elevator to the spaceship. Do not go back down even if you killed the guard. Walk behind the ship and enter ship .

Inside, turn on power , press ascent and set dial to vac (turn dial ) also works). Pull throttle (or simply press  ↓  on your keyboard), and after a while, you should clear the gravitational pull of Labion. [20]

While waiting for the next sequence, you can set dial to hac and then move the throttle and see the effects, but it doesn't do anything else. Wait as Vohaul takes control of your ship and makes it fly into the asteroid's shuttle bay.