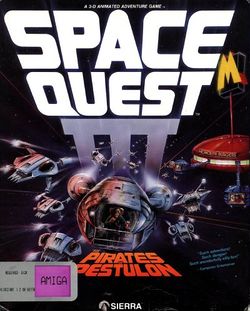 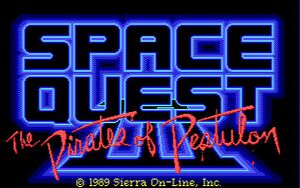 Space Quest III is a graphical adventure. It is one of the last of Sierra's releases to use a text parser for character control. Its technical innovations rely on beautifully detailed background art (a remarkable achievement for 16-color palette with "primitive" 320x200 screen resolution). The game features support for Roland MT-32 External Sound module, along with support for Sound Blaster and AdLib and features an extensive soundtrack. More notably, innovations in the game design provide more open-ended gameplay, especially when compared the game's contemporaries. Arguably its biggest and most overlooked contribution is thought-through approach to puzzle solving, enabling the player to use similar (but different) items to solve a puzzle.

The experimentation with game design is further emphasized with the inclusion of three rather distinct minigames, responsible for elements of arcade-style gameplay in contrast with the game's emphasis on story-driven puzzle-solving. The mini-games remain as flavorful and clever as the remaining design and writing of the Space Quest series, and topical (for 1989) satire of popular video games.

The new adventure in the Space Quest series continued to expand thematic trends of previous two games: a hilarious farce set in a science fiction universe. Perhaps the legendary status of this remarkable adventure title is owed to its poignant humor, which ranges from slick social commentary to slapstick silliness to heavy-handed criticism of (then young) video game industry.

To say that the Pirates of Pestulon is a piece of video game history would not be an over-dramatization. Almost twenty years since its release the game does not cease to be an engaging piece of interactive storytelling, despite dated look and parser interface.