From StrategyWiki, the video game walkthrough and strategy guide wiki
(Redirected from Spartan X)
Jump to navigation Jump to search 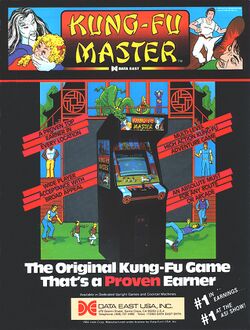 Kung-Fu Master is the undisputed grandfather of the Beat 'em up genre. It was one of the earliest games to feature a lone martial artist who must go up against a massive army of less than capable fighters, as well as bosses that require special strategies to defeat. The main character does not die from one hit. Instead, he has a life bar that decreases every time the player fails to dodge an attack. The player may choose between punches or kicks, high or low attacks, and jumping or crouching.

Known as Spartan X in Japan, the game was actually based upon a movie of the same name which starred Jackie Chan. More of a comedy than an action title, the game's story is taken directly from the movie, but the content differs quite a bit. Some of the content is actually inspired by several Bruce Lee movies. The 5-Floor Pagoda as well as the third boss who mimics the giant Kareem Abdul-Jabbar is taken from "Game of Death". The shot of a kidnapping letter and a tied-up girl in a red dress is taken from "Bruce's Finger". And the red pillars and ceiling tape were inspired by "Goodbye Bruce Lee, his Last Game of Death".

Because the success of the game coincided with the launch of the Famicom in Japan, Nintendo saw the game as a must-have title for their system. So they licensed the game from Irem and published it themselves. It was the third best selling Famicom game released in 1985, selling a reported 1,420,000 copies throughout its lifetime. When Nintendo brought the game to North America, they shortened the title to simply Kung Fu, possibly to avoid legal problems with Data East, who held the rights to the game in North America. Data East licensed the game to popular European home computer systems, while Activision (later, Absolute) provided ports to popular Atari systems available at the time.

Thomas, the game's hero, and his girlfriend Sylvia are suddenly ambushed by a group of unknown assailants, and Sylvia is kidnapped. Thomas receives a ransom demand from the mysterious 'X' informing him that Sylvia is being held in the Devil's Temple.

Thomas must kick and punch through the five enemy-packed floors of the temple to reach Sylvia and rescue her. A fearsome guardian awaits the player at the end of each floor, and must be defeated before Thomas can continue his progress up through the temple.