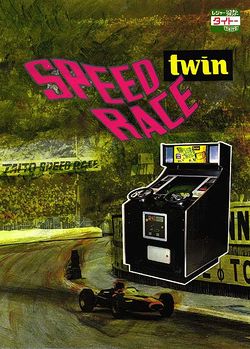 Speed Race Twin is a racing arcade game, that was released by Taito Corporation (in 1976); as the name suggests, it is the sequel to Speed Race (which was released two years earlier). Players must again use a steering wheel and gear shifter, to take up control of a car, with a single pedal to make it accelerate - but this time, two players can play simultaneously. When either player's car crashes into a guard rail, or a CPU-controlled car, it will automatically get sent back to the start; however, if either player's car crashes into the other player's the one which was ahead at the time of impact will stay in position while the other one shall get sent back to the start. When either player's car rams one of the round obstacles on the track it will be bumped aside - and when driving in a "Slip Zone", carried over from that original "Speed Race", turning the steering wheels rapidly will cause the cars to slide out of control. The gameplay will also, as in the original game, be extended at 2000, 4000 and 6000 points.