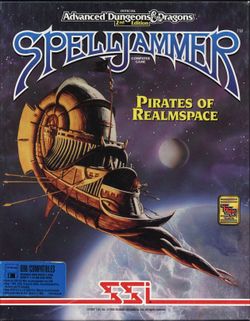 Spelljammer: Pirates of Realmspace is a role-playing game developed by Cybertech and published by Strategic Simulations (SSI) in 1992 for the MS-DOS. It is an adaptation of the 2nd edition Advanced Dungeons & Dragons setting Spelljammer, but all the action takes place in the space around the planet of the Forgotten Realms.

An Amiga port was planned and development started, but was then abandoned long before completion stage.

Spelljammer is the name of an Advanced Dungeons & Dragons campaign setting.

Pirates of Realmspace is the title of this adventure.

The Spelljammer setting was released in 1989. The basic idea was to give players the means to transfer Dungeons & Dragons characters between different settings.

Spelljammer allows to fly between three different planetary systems that host three different D&D worlds: Forgotten Realms (Realmspace), Greyhawk (Greyspace), and Dragonlance (Krynnspace). A fourth system, called Clusterspace, is exclusive to the Spelljammer setting. Each planetary system is encased in a Ptolemaic crystal sphere, and such spheres are immersed in a colorful and luminescent medium called "Phlogiston" or "the Flow". Stars are small holes in the crystal spheres, from where the phlogiston burns in and flying ships can move out. The spelljamming ships require a magical spelljamming helm to fly in the "wildspace" between planets and a more powerful helm to fly in the phlogiston between different planetary systems. "The Spelljammer" is actually the name of a mythical, living ship similar to a huge manta ray that hosts a whole city on its back.

Official support for the Spelljammer setting was discontinued in 1994, when the Planescape setting replaced it as a means to connect different D&D settings.

Pirates of Realmspace is limited in scope with respect to both the Spelljammer setting and flight simulation games of the same age.

In fact, the Spelljammer setting includes four planetary systems, plus the interstellar Phlogiston. On the contrary, Pirates of Realmspace is limited to the single system with the world of Forgotten Realms (hence the name "Realmspace").

Three-dimensional flight simulators already existed since many years (examples: 1984 Elite; 1990 Wing Commander). In these games, space combat is three-dimensional and newtonian: the ship can turn left and right, go up and down, and more. In Pirates of Realmspace, movement is two-dimensional: the ship can only move forward and back, left and right, like a small boat bound to the sea surface. This comes from a literal adaptation of the pen & paper Spelljammer rules, where ships were bound to the flat surface of the tabletop.